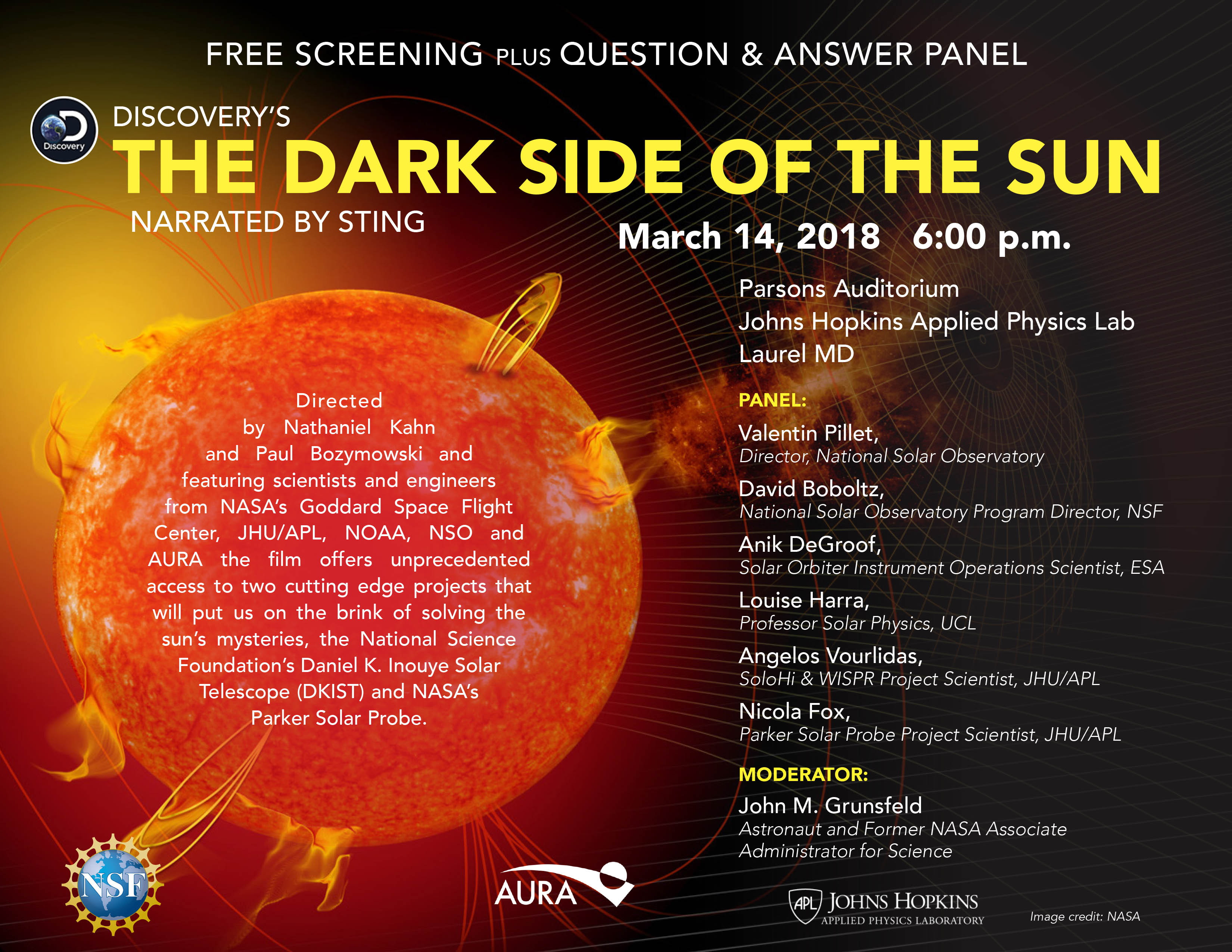 The National Solar Observatory (NSO), Johns Hopkins University Applied Physics Lab (JHU/APL), and the Association of Universities for Research in Astronomy (AURA) are proud to present a free screening of the Discovery Channel’s “THE DARK SIDE OF THE SUN” narrated by award winning artist Sting, directed by filmmakers Nathaniel Kahn and Paul Bozymowski and produced by RadicalMedia.

The screening will take place on March 14th at 6:00 pm in Parsons Auditorium at JHU Applied Physics Lab in Laurel, Maryland and will be followed by a question and answer session with a panel of NSO, NASA, JHU/APL, and European Space Agency (ESA) scientists moderated by John M. Grunsfeld (Astronaut and Former NASA Associate Administrator for Science).

“THE DARK SIDE OF THE SUN”, features scientists and engineers from NASA’s Goddard Space Flight Center, JHU Applied Physics Lab, National Oceanic and Atmospheric Administration (NOAA), NSO and AURA and offers unprecedented access to two cutting edge projects that will put us on the brink of solving the sun’s mysteries. The documentary highlights the National Science Foundation’s Daniel K. Inouye Solar Telescope (DKIST), which will focus its enormous mirror on our star, revealing never before seen detail. The largest solar telescope in history, DKIST is currently under construction atop a mountain known as Haleakalā, “the house of the sun,” in Maui, Hawaii, and is expected to be completed next year. Also under construction in the clean rooms of the Johns Hopkins, Applied Physics Lab, is NASA’s Parker Solar Probe, a spacecraft designed to fly to the sun and unlock the secrets of the corona, the mysterious hazy cloud that surrounds the sun and that can be seen during a total solar eclipse — like the one that was visible across large parts of the United States in August 2017.

One of the crucial reasons for building DKIST and Solar Probe Plus is to understand the physics that will facilitate advance warning about potentially catastrophic solar storms. The last huge one to hit Earth was in 1859. Known as the “Carrington Event,” it almost brought the British Empire to its knees, setting telegraph wires on fire and lighting up the sky around the world with Northern Lights or “Aurora Borealis” so intense that people were able to read a newspaper at night. If the same scale storm were to happen today, it could fry power grids, knock out satellites and GPS systems, and cripple our information-age communications systems, setting us back decades and causing trillions of dollars of damage.

Yet, with enough warning, systems can be powered down before such a storm hits, and we can protect ourselves from devastating loss. A coronal mass ejection of the scale experienced during the Carrington Event is believed to impact the earth roughly once every 100 years. This means we are overdue for the next big one.