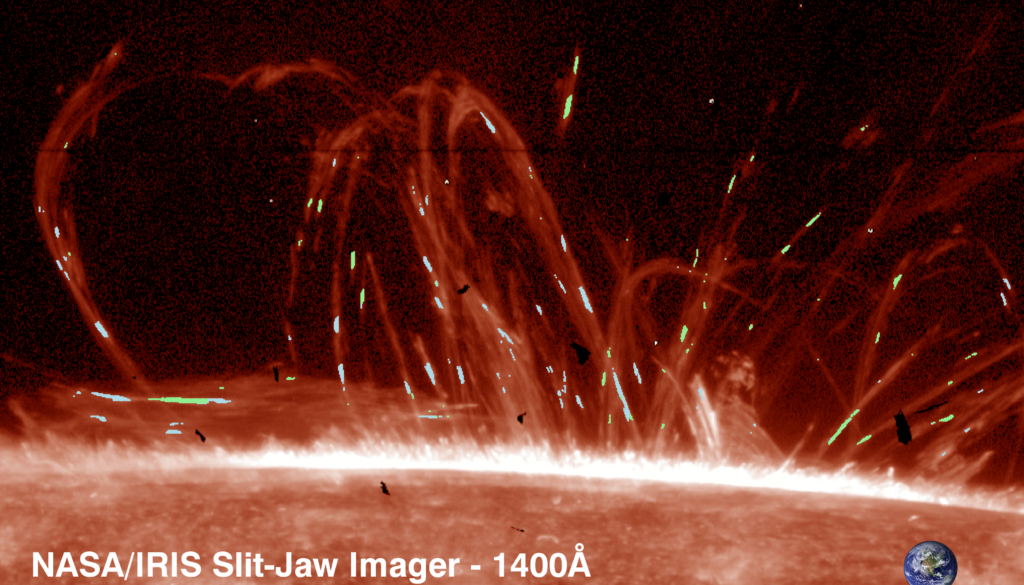 Coronal rain above the solar surface seen in emission from Silicon+3 (three times ionized) gas at temperatures of ~60,000 deg C using NASA’s Interface Region Imaging Spectrograph (IRIS). Our new computer vision algorithm automatically locates rain “drops” with apparent motion and are here colored blue if traveling to the right and green if traveling to the left.

Self-driving cars. Facial recognition. Finding cancerous cells in CT scans. Ensuring thousands of products we use daily are manufactured correctly. Each rely on “smart” machines (or computers) processing large amounts of information, mostly images, and making decisions based on that information. Training machines to “see” and understand real-world objects, like a stop sign in front of a self-driving car, can be a very difficult task and often leaves little room for error.

In our studies of our local star, the Sun, we also rely on such “machine vision” or “computer vision” techniques to help us understand the features and phenomena it creates. The Sun evolves, sometimes rapidly, and telescopes like the upcoming National Science Foundation’s Daniel K. Inouye Solar Telescope, being built by the National Solar Observatory, acquire data at such high rates and large volumes that no single human can process the data. Automation is essential.

This is especially true for the study of solar coronal “rain”. Yes, it rains on the Sun, but it’s not like that on Earth. The Sun’s rain has a temperature of 10s of thousands of degrees, actually frigid in comparison to the million degree solar corona (see video). It also doesn’t usually fall straight down, instead following the curves of the Sun’s magnetic field. It can tell us a lot about the Sun’s atmosphere, perhaps even how it is heated. But there is no rain gauge to collect it and measure it. Instead, we rely on rapidly acquired images to watch the rain ‘drops’ or ‘blobs’ as they fall to the solar surface at speeds averaging 150,000 miles per hour (70 kilometers per second). As one can imagine, counting thousands of rain drops and measuring how fast they fall would take a very long time for a researcher to do by hand.

At the National Solar Observatory, a technique to automate coronal rain analysis has been developed that advances a computer vision technique patented by Paul Hough in 1959. Hough’s motivation was the analysis of bubble tracks in the measurement chambers of atomic particle colliders, similar to the Large Hadron Collider. Our new technique expands on a method referred to as the ‘Rolling Hough Transform,’ which is an adaptation of Hough’s original technique to study fibers of the Galactic interstellar medium. In each case, the concept of the technique is the same. It creates a kind of voting process where all individual data points within some area can cast one vote for every line or path of which it might be a part. And at the end, the line or path with the most votes win.