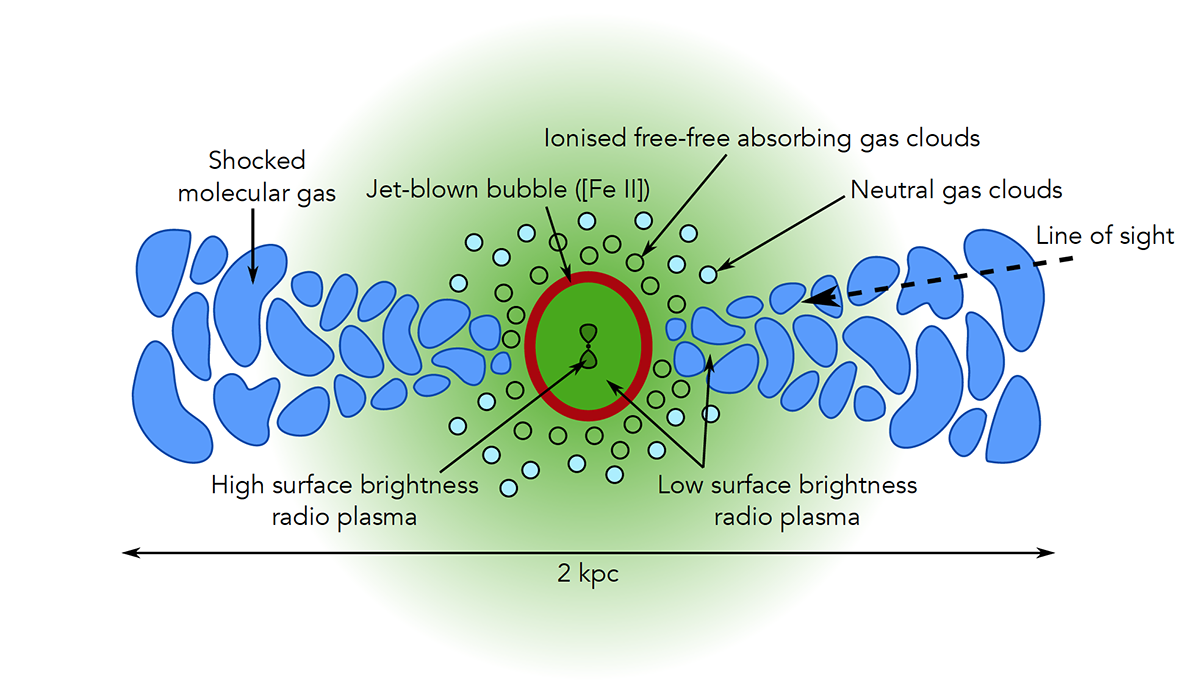 Image: The paler green region represents low surface-brightness jet plasma filling the jet-driven bubble, which drives a shock into the surrounding gas and causes ionized emission (dark red). Jet plasma also percolates radially through channels in the clumpy circumnuclear disk (blue), driving shocks into neutral gas and causing molecular emission. The pale blue circles represent clouds of neutral gas. The line of sight is indicated by the dashed line; the disk is inclined such that the Western lobe is partially obscured by the disk, whereas the Eastern lobe is completely obscured by the disk.

Astronomers using adaptive optics on the 8-meter Gemini North telescope have resolved, for the first time in near-infrared light, a giant elliptical galaxy with a young radio jet down to unprecedented scales. The observations also show how the jets, emanating from a black hole at the center of this galaxy, are heating the interstellar medium, which may have a significant impact on the evolution of the host galaxy.

Using adaptive optics (AO) and near-infrared imaging on the 8-meter Gemini North telescope in Hawai‘i, a team of astronomers lead by PhD student Henry Zovaro (The Australian National University) report the discovery of shocked molecular and ionized gas resulting from a jet-driven feedback coming from the center of a compact radio galaxy. The discovery offers important information on how such activity can influence the evolution of its host galaxy.

The Gemini observations are featured in the accepted paper in the Monthly Notices of the Royal Astronomical Society.